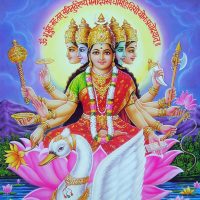 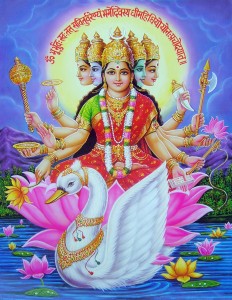 The religiosity and spiritual leanings are seen in the Vimśāṁśa (D-20 chart). The planets in trines to the Vimśāṁśa ascendant provide the deities the native will like to worship as well as his mantra. This divisional chart is very personal and connects the individual to the occult. Mantra recitation is seen in the ninth house (Japa), Bhakti (love/adoration of any deity) is seen in the fifth house while meditation is seen in the 12th house. The Karakas for these are Jupiter, Venus and Ketu respectively while the overall control is with the luminaries.

The Dasāṁśa (D-10 chart) is also examined about the work (Karma) that the individual does to further his spiritual leanings. This could be the gigantic task of setting up the Ramakrishna Mission or headship of the Advaita Maths of Śaṅkarācārya. For example, in every dasāṁśa of the head Śaṅkarācārya of the Kanchi Kamakoti Peetham, the dasāṁśa lagna seems be a water sign (being in trines to Cancer) with a powerful Jupiter – Mars Yoga.

Pravrajya Yoga is caused by the conjunction of four or more planets in a quadrant. However, there will be many children born during the day or the conjunction of these four or more planets may continue for some period. How then do we identify the Priest or Saint? What will be the extent of renunciation? Renunciation of material and bodily wants is complete renunciation. Thus, if the ascendant is aspected by Saturn (Brahma) or if the Śubhapati (Lord of Moon sign) is only aspected by Saturn, Brahma Vrata is taken. If Saturn alone aspects the lord of the ascendant or vice-versa, Pravrājya Yoga occurs. If all planets aspect the lord of the Moon sign by sign or planetary sight, then the native becomes a famous Saṅnyāsi. If four or more planets are in quadrants with the lord of the tenth house, then the native attains heaven after death. If Jupiter is in Pisces in the ascendant, Nirvana is indicated. If Jupiter, Moon and the ascendant associate with Saturn, the native renounces worldly pleasures. Parāśara gives a fine hint to examine the Upapada that deals with marriage. If Ketu is in the navamśa lagna aspected by Saturn, the native is a fake Saṅnyāsi while Venus joining this combination produces a powerful Tapasvi (one practicing penance).

Post-Vedic (Modern) Texts: The modern day texts say that the Sun produces a worshipper of the Sun God, Ganesh and Shakti and one reciting the Gayatri Mantra. The Moon gives a Śaiva or a bhakti Margi (creed of adoring the deity). Mars gives a begging tendency while Mercury can produce a seller of herbs/medicines in the garb of a monk or a tantrika. Jupiter produces the truthful saints and true saints (jñāna yoga) while Venus produces a Vaiṣṇava. Saturn produces tantrika and aghoris etc. and can give very severe penance. The benefic planets should be in the third or sixth house from Āruḍha lagna or the malefic planets should be in the 2nd, 4th or 7th for renunciation. Rāhu in the 7th or 12th house from Ārūḍha Lagna produces deep spiritualism. The renunciation can be timed from Dṛg Daśā and the Āruḍha Lagna. This can also be timed from the Vimśottari daśā of the Ātmakāraka, Saturn or any benefic in the third or sixth house from Ārūḍha Lagna or any other malefic in other houses as indicated.

Vedic Seers: The Hindu deities at the time of Maharishi Parāśara or Jaimini were Siva (Sun), Pārvatī (Moon), Kārtikeya (Mars), Vishnu (Mercury), Indra (Jupiter), Sachi or Lakshmi (Venus as the spouse of Indra or Viṣṇu respectively), Brahma (Saturn), Durga (Rāhu) and Ganapati (Ketu). The inclination of the Christian is seen from the Holy Ghost (Sun), Virgin Mary (Moon), Crusaders (Mars), Jesus Christ (Jupiter), the Pope and other saints (Mercury), Angels (Venus) etc. Modern day Hinduism developed many Gods and demi-Gods although Parāśara mentions the Dasavatāra or the ten forms of Sri Vishnu that the nine planets and the ascendant represent. Similarly, there is the cult of the Earth Mother and the Dasa Mahā Vidyā.