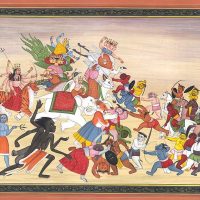 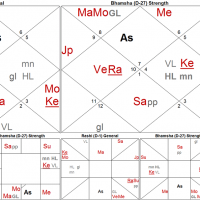 Bhāṁśa is from the word (and letter) भ (bha) referring to the bha-chakra or the zodiac composed of 27 nakṣatra. The letter भ (bha) also refers to the number 27. Therefore bhāṁśa means D27 or the 27 divisions of a sign. It also means nakṣatrāṁśa. Bhāṁśa = भ (bha) + aṁśa

Instead the word भा (bhā) with the longer ‘ā’ refers to Venus and is from Bhārgava or Bhṛgu.

Each bhāṁśa is a twenty-seventh (27) part of a rāśi (30°) thereby measuring 1°16’40” and the bhāṁśa tables are made counting all the divisions in parivṛtti method – regular, zodiacal without any jumps

There are various ways to calculate the D-27, and interpretation will depend on the type of calculations used. General theory of the D-27 is connected to the Moon, it is called the bhāṁśa or nakṣatrāṁśa. The traditional calculation should be called the bhāṁśa and is connected to the strength of the Moon. The nakṣatrāṁśa has a different calculation, which no program as of yet calculates. It has more to do with nakṣatra.

Sanjay Rath gave a small talk on the bhāṁśa at the East Coast workshops 2003 as a side note to the “Steps in Horoscope Interpretation” workshop. This information comes from my notes, so is only my understanding of what was taught.  The CD should be available soon from SJC USA.

Planets in the bhāṁśa show the planets consciousness level. For example, if the Moon is strong it makes the horoscope stronger, if the Moon is weak, it makes the horoscope weaker. It also shows the strengths and weaknesses of a person’s mind. Two things most important to judge are the (a) kendra and (b) the Yuga rāśi. Planets in Kendra will give results easily, they are your strength, what you get easily. Weaknesses are what you don’t get easily or at all. As regards Yuga rāśi, fire signs-what you get easily (100%)-Satya Yuga; water signs- 75%; air signs- 50%; earth signs- 25% weaknesses, flaws, Kali Yuga.

Predictive ability is based on Jupiter: the results you’ll get. If Jupiter is in the 7th house in a fire sign then the relationship will come easily whereas in earth sign then mantras and work are needed to achieve. 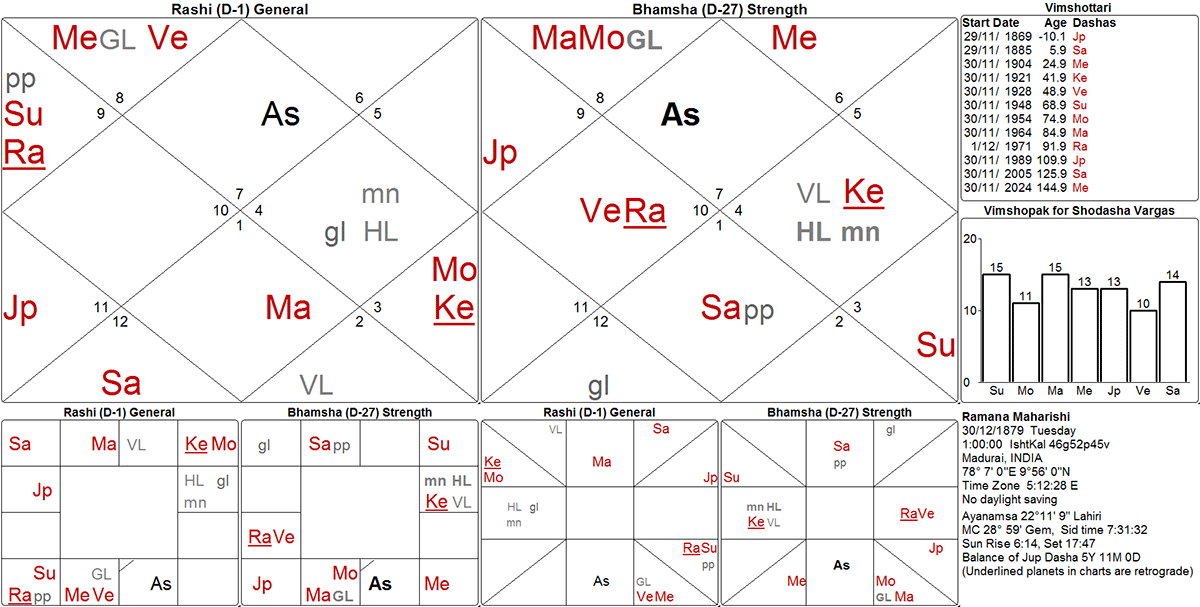 Position of Venus will show your mental abilities for romance and relationship. For a Saṅnyāsi, Venus in an earth sign is good as it brings the power of Venus down to a bare 25%; look at Ramana Maharishi and Swami Vivekananda. If Venus is in a fire sign it would not be advised to take saṅnyāsa. First look at the natural significations and the tattva, study the karakas in the tattva. The tattva is the independent strength of the mind. Note that any planet in D-27 Capricorn, Kali Yuga sign, will have its naisargika karaka weakened. 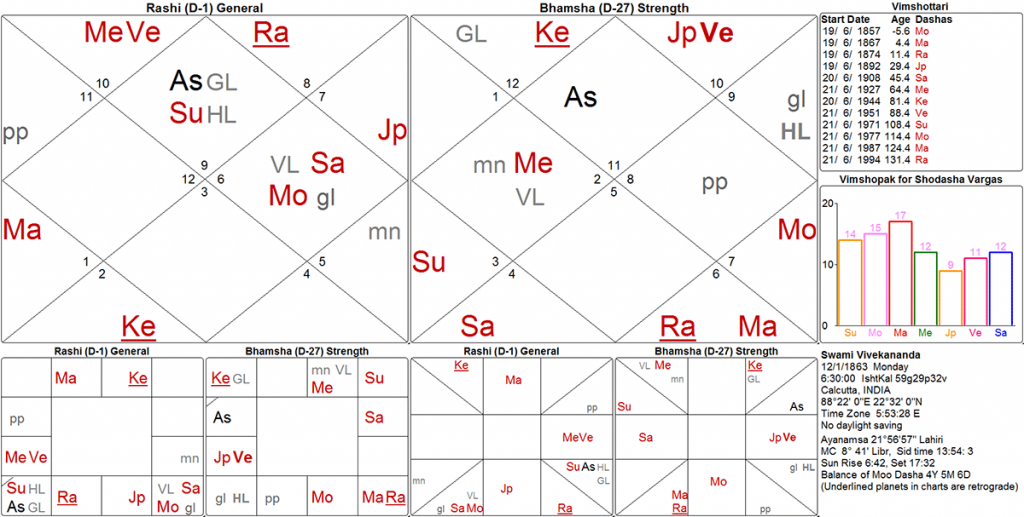 Studying the Moon has its own separate rules.

Step 1: When studying the Moon, look at the rāśi it occupies in D27 Chart. For example, in the chart of the great saint Ramana Maharishi, Moon was in Scorpio in D27 conjoined its dispositor Mars. Always study the Moon from the rāśi to know the strength of the mind.

Step 2: Look at where the nodes are in relation to the Moon as these are actually lunar nodes and show the extremities of the mind. Rāhu shows Bhoga mārga, and Ketu shows Mokṣa mārga. Judge which one of these has a better relationship or influence on the Moon.

The stronger of the two will show the primary mental impulse as it will show the stronger path, and where the individual’s achievement will be. This is the direction of the mind. For example, Ramana Maharṣi had Ketu in Cancer in trines to the Moon in Scorpio. Further, Moon and Ketu are in Parivartana Yoga, he had perfect spiritual discrimination and completely chose the mokṣa mārga. Don’t look at the houses as there is no Mother, Father or brother in this division. Vivekananda had Moon and Rāhu in a 2-12 relation and Moon and Ketu in a 6-8 relationship. He didn’t want to become a saṅnyāsi but his guru made him.

Step 3: Your lives best achievements will be seen from the Moon. What, where, and how this achievement needs to be done will clearly be seen.

Vivekananda had Sun in trines to the Moon in Gemini, Sun shows a spiritual lineage (esp. as it is in lagna in his rāśi chart D1), and in the bhāṁśa D27, it is in Gemini showing Mercury’s want to teach. His greatest achievement was setting up the Ramakrishna Mission for teaching spirituality. 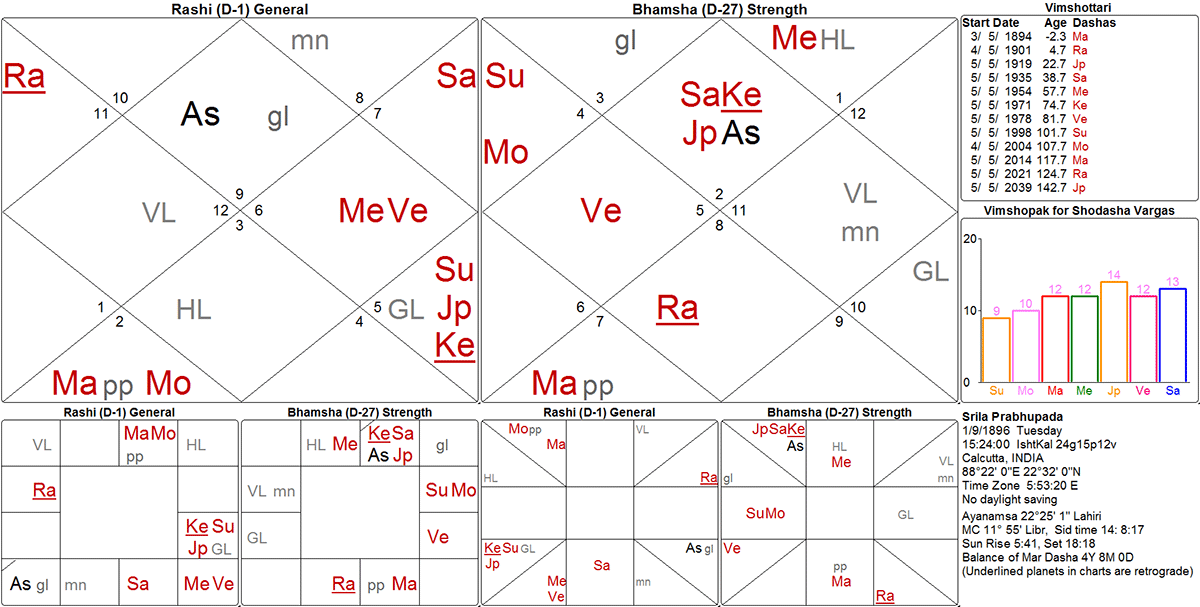 In the bhāṁśa D27-chart of Prabhupada, Moon in Cancer with the Sun. It was trines to Rāhu, and he tried to succeed in the world many times but failed; Rāhu is in Scorpio in debility. So the Sun became the most powerful factor and had him set up a spiritual organization (Sun). In both charts of Vivekananda and Prabhupada, the Sun dominating the influence on the Moon confirms spiritual leanings of a very strong, traditional kind. Bear in mind that Sun is anti-Rāhu and exalts in a nakṣatra of Ketu.

People with one planet trine to Moon succeed easily because there is only one direction. When there are many planets trine, the person has many wants and will tend to spread themselves out in many areas. So that is the Bhāṁśa. This is the general chart to be used in normal analysis.

The nakṣatrāṁśa is to be used by psychologists, not the average person. It shows the foundational field of the mind, the inner psychology behind thoughts and actions. There is a link behind the rāśi, drekkāṇa, navāṁśa, and nakṣatrāṁśa: D1, D3, D9, D27 …see the progression of numbers. You can see that D-27 is the drekkāṇa of the Navamśa or the navāṁśa of the drekkāṇa! It is very important for psychology.

One can follow the rāśi to d-3, d-9 to d-27 to see the impulse from the environment to the inner mind. Once the decision is made, the impulse arising in the deeper mind goes through the evaluation back to the rāśi where it is enacted on the environment.