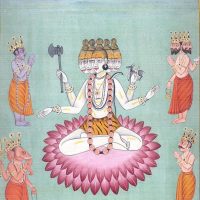 The following are my teachings to a student (Shiv Pujan) for presenting a paper at the Hyderabad Conference. {tab=Tattva} Introduction Trimsa means thirty and amsa means division indicating the one-thirtieth division of a sign. The Sun progresses at the rate of about one degree everyday and its progress in 120 days is analogous to covering a span of 120 degrees in the zodiac. Manu smriti teaches us that ‘a year of the human beings is equal to a day of the Devas’. So, 120 days of the Sun is equal to 120 years of the human beings, which is the full life span. This indicates that the one-degree motion of the Sun has relevance to longevity and suffering. Accordingly, Parasara advises the use of this ‘Trimsamsa’ for determining the evils that the native has to suffer due to past karma. The Trimsamsa (D-30) chart is used to delineate various kinds of evils one is likely to face. In a female nativity, it shows her moral character, and this can be extended to all charts as well. Trimsamsa and Tattva The Trimsamsa lords are Mars (5°) Saturn (50) Jupiter (80), Mercury (70) and Venus (50) for odd signs and the reverse for even signs. The deities accordingly are Agni, Vāyu, Indra, Kubera and Varuṇa for odd signs and the reverse for even signs. Pt. Sanjay Rath writes, “The deities are based on the five elements of Fire (Agni), Wind (vāyu), ākāś or Ether (Indra the God of Gods – the Sky), Prthivī or Earth (Kubera the lord of wealth), and Jala or Fluid (Varuṇa the God of Water). Whereas each of the four elements of Agni (Fire), Jala (Water), Vāyu (Wind) and Prthivī (Earth) rule the trines of Aries, Cancer, Libra and Capricorn respectively, the fifth element ākāś (Ether) pervades all signs and hence, Indra becomes the God of all these Gods. This is mentioned in the Vedic Hymn “śaṁ no indra vṛddhaśravāḥ” wherein all the peoples from time immemorial have been taking shelter (asraya) under Indra for their welfare and protection from evils as the Trimsamsa represents the evils that befall man.” Table: Trimsamsa & Tattva

Shadripu – Six Weaknesses The Parashari Trimsamsa chart is used to know about diseases. The Trimsamsa chart shows ṣaḍripu (six weaknesses). These are acquired and are represented by Saturn who is Karaka of sixth house. In addition, it is used in delineating moral character in a female nativity. One of the five Tatwa (primordial elements) comes under heavy affliction and shows the kind of health problem one is likely to face. It also shows kind of character one has and the time of manifestation of such character. Six planets show six acquired weaknesses as per table below. It is noteworthy that the Satwa Guna planets do not contribute to the ñaòripu or the six weaknesses. The Satwa Guna planets are the Sun, Moon and Jupiter. The rajas Guna planets Mercury & Venus cause Ego/jealousy and lust related weaknesses while the Tamas Guna planets cause anger (Mars), greed (Rahu), intoxicant addiction (Saturn) and illusions and mistakes (Ketu).

Trimsamsa shows the number of ṣaḍripu acquired by a person. Diseases can be of two types: Nija (self / internal) and Agantuka (External). Each of these has two sub-categories. Nija disease can affect either the body (eighth house) or mind (eighth house & fifth house). Agantuka can be of two types, i.e. Driṣṭa (known causes sixth house) and Adriṣṭa (unknown causes, Badhak and Badhakesh). Here we are dealing with Driṣṭa type of diseases, which are acquired and should be seen in sixth house. Trimsamsa chart falls in the second harmonic of sixth house. The following formula below shows its level of working.

The above formula shows that D/30 chart works at the sub-conscious level and we can find out the weaknesses an individual has acquired in this life. If one were conscious of forces at work in D/30 chart, one would not have any weakness at all. {tab=Bhava} Lagna The lagna of any chart shows the native himself. The lagna of D/30 chart shows his weaknesses. It shows what has been defined as Avishnu (i.e. not Vishnu or against Vishnu). In this it is opposite of what is shown by a D/3 chart. We have to focus on Lagna, tenth house and eighth house to know the weaknesses (shadripu) of the native, as these are important houses while considering the longevity of the matter in focus in any chart. Planets in Lagna will show weaknesses acquired during current birth directly related to bodily weaknesses. If any of the Shadripu coming from any planet is in Lagna, this is a weakness that has developed in this birth due to inherent weakness of D/30 Lagna itself (which means intelligence, learning etc.). In addition to planets in Lagna, the Lagna Lord of this chart will indicate the Tatwa that has become strong or weak. The Lagna Lord of D/30 chart shows the exact disease. Tenth house Malefics in tenth house denoting Shadripu shows mental weaknesses where weaknesses develop due to various pressures, which the mind fails to counter. Eighth house Planets afflicting eighth house shows weaknesses inherited from past incarnation. Important considerations in Delineation If the Rasi chart is in Agni Tatwa and the D/30 chart shows Jala Tatwa (opposite of Agni Tatwa) or vice- versa, there is sure to be plenty of problems. Dasa and Antar Dasa lord who are mutually hostile by owning opposite Tatwa create many serious problems (For example, Saturn Dasa-Venus Antar Dasa or Venus Dasa-Saturn Antar Dasa or Mercury Dasa-Mars Antar Dasa or Mars Dasa- Mercury Antar Dasa) When D/30 chart shows contradictory influences on any pair, bad results are likely to follow. Five planets (leaving aside the non-luminous planets Rahu and Ketu and the Sun and Moon, having no lordship in Parashari Trimsamsa, are omitted) rule five Tatwa (primordial elements) as below. The Mahapurush Yoga each one of them forms is given along with the presiding deity, as per the table given below.

The 12 signs of Zodiac are also divided into four groups as below: Table: Rasi Tattva

The fifth element namely Ether keeps these four elements together. Use of Naisargika Dasa Naisargika Dasa (natural period) is a wonderful tool for finding out the negative experiences one is likely to go through in this life. The natural ruler of a person’s age between 5-12 is Mercury, between ages 13 – 32 is Venus and between ages 33-50 is Jupiter. Any afflictions to these planets will show negative experiences in the corresponding age group. In particular, curses on these planets should be checked in D-30 chart. {tab=Remedy} Remedies based on D-30 chart A remedy can be suggested based on the Trimsamsa Lagna. As Trimsamsa Lagna shows one’s weaknesses, a proper remedy would do away with these weaknesses.

In this context, Mahidhara opines that one who worships the Pancha devata, everyday (as per the table above) shall have a smooth life and shall always be protected irrespective of evils. This is so because all Trimsamsa are covered by this worship. In Pancha – Upachara Pooja the items given under the following table indicated against the planet should be offered. Table: Planetary Remedies

Best Remedy: The best remedy for any planet is to worship the deity concerned with the planet in Trimsamsa. For example, if Sun is in Saturn’s Trimsamsa, then worship Shiva (see table above) for relief from the negative Sun. Also see Dasa/Antar Dasa and then decide the remedy. Similarly if Saturn is in Mar’s Trimsamsa, worship Sun. {tab=Video} 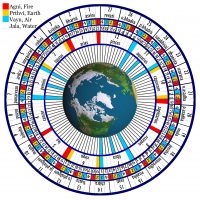 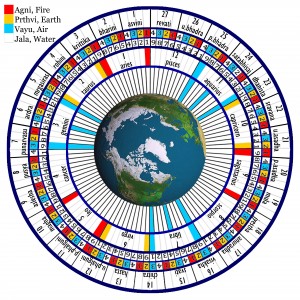 What is the Trimsamsa, and how to draw a Trimsamsa Chart?

Trimsamsa means the one-thirtieth portion of a sign measuring one degree. Unlike other divisions, the Sun and Moon are not the Lords of any trimsamsa and the Nodes (Rahu & Ketu) also do not owm any trimsamsa. Thus the remaining five of Mars, Mercury, Jupiter, Venus and Saturn own the trimsamsa. They represent the five elemental states of existence (see table 1).

The positions of the planets and the Lagna in the Rasi chart are used to determine the Trimsamsa occupied by them. For example, if Jupiter is in 26-07′ in Pisces, then since it is in an even sign, from Table 2, we see that it is in Scorpio (even sign ruled by Mars). In this manner, the trimsamsa of all the planets and Lagna is determined and the resultant chart is called the Trimsamsa or D-30 Chart. The trimsamsa chart of the standard nativity is given below.