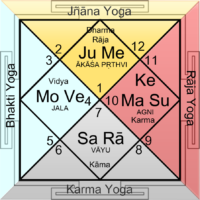 The dasamsa should be analyzed in detail independently like the Rasi Chart. The artha (Artha: Finance, money) trikona is composed of the 2nd, 6th & 10th house. Planets in these houses will have a direct bearing on the functioning of the native. Any planet in the tenth house is independently capable of giving good yoga that could mean power, rise and success in ones career. In addition, the seventh house should also be studied, as it is the pada to the tenth. If the Sun dominates in these houses, a political career or simi­lar public service is indicated. Mars gives Police, intelligence-related activities, Army etc., Jupiter pro­duces lawyers, Judges, Priests, Astrologers, etc., Mer­cury gives business, writing & publishing, trade etc., Venus gives entertainment and all works of beauty while Saturn gives burden, menial jobs etc. Rahu can indicate imports while Ketu shows exports etc.
{tab=Bhava}
The tenth house deals with prosperity & growth (significator: Jupiter), karma including all works, actions (significator: Saturn), professions & career (significator Mercury), fame (significator Sun). It rep­resents the mid-heaven and plays a vital role in the chart, second in importance only to the ascendant Low astakavarga bindu in this house can consider­ably weaken a chart All planets in the tenth house generally give very good results. Even Rahu gives pilgrimages if in the tenth in the natal chart or from the Narayana dasa sign. Houses, whose lords are in the tenth house, gain considerable strength and the activi­ties ruled by them succeed. The tenth house has argala on the 6th, 7th, 9th & 12th houses thereby directly affecting the matters ruled by these houses such as enemies, servants, fortune, sleep and other matters as well. For example, Chanakya (alias Kautilya is the famous author of Arthashastra, a treatise on politics and government.) says that a king can never fall if his servants are faithful. If the servants are faithful, the sixth house is favorable and the en­emies also ruled by the sixth house cannot win. This automatically affects the status ruled by the tenth house. Similarly, success automatically brings more business and associates, besides keeping the spouse happy. Ones boss, guru, or lady luck ruled by the ninth house does matter in ones career. The 12th house rules final emancipation and meditation. Bad actions in the tenth house will reflect adversely on the 12th house and moksha will be denied in the long term while sleep could be adversely hampered in the short term. A fine solution to this negative cycle would be to take up transcendental meditation (TM). The 11th, 1st, 2nd, & 8th house have argala on the 10th house or are capable of affecting the actions and other matters ruled by the tenth house. Thus gains, self & net profit or loss will influence decisions and actions. If an exalted or strong natural benefic is in the ascendant, the native will be guided by its ideals and this will have a strong impact on his decisions & action. In this manner, the argalas and their obstruc­tion should be understood.

The fifth house is the eighth from the tenth house representing birth (beginning) and longevity (time of implementation) of an action (10th house). Thus, the fifth house rules authority and power that one en­joys due to skills & knowledge as well as one’s Purva Punya. The timing of joining a new job is done from ­the fifth house. Rajayogas also need to be confirmed in the Panchamamsa (D-5 Chart) and the Dasamsa (D-10 chart). The eleventh house from ascendant is the ‘Hara’ or end of life. Similarly the eighth house being the elev­enth from the tenth house is the place of retirement or end of career. The eighth house, if beneficially disposed, can give huge loans to take up large enterprises and its argala on the 7th & 10th house can give a new boost to one’s business. If ill disposed, one’s business will run into endless debt and ruin. The fol­lowing points below may be borne in mind while analyzing the dasamsa.

The boss is seen from the ninth house while the subordinates are seen from the fifth house. During the period of a malefic planet having papargala (malefic obstruction) on the ninth house, one is tormented by the boss (or ex-boss) while a benefic having subhargala (benefic intervention) shall give a very good and helpful boss. Thus, in charts showing any kind of employment, the concerned houses for the self are the first, 6th & 10th. The third house from these (3rd, 8th & 12th) can cause prob­lems. The eight house will show retirement; the third house shows short leave while the 12th house shows long leave.

The ascendant lord in the ninth house makes a person very independent (he likes to be his own boss) and business is best advised in such charts or employment with a lot of scope for independent work. The second house is the eighth from the sev­enth house and shall play a crucial role in starting any business. In simpler words, the starting of any business is determined by the finance available. The quadrants to the 2nd house are the 5th, 8th & 11th houses showing the money that is put in by the partner, loans from banks etc. and self respect­ively.
{tab=Planets}
Signification of Planets

1 Planets in the tenth house generally always give good results. The Sun and Mars that get direc¬tional strength in the tenth house can be a great blessing in any chart providing dynamism and suc¬cess. The Sun indicates pride, respect, position, sta¬tus, responsibility, independent views, and help from politicians and senior officers. The Moon shows fluc-tuation of fortunes and success in public dealings, water or liquids, emotional views and changeable of work etc. Saturn indicates rapid rise and fall, hard work. Ketu indicates routine job. In this manner, the standard texts provide considerable information on the results of the planets in the tenth house based on the nature of the planet.

3 The third basis is to consider the houses having argala on the planet in the tenth house. The ascendant has sukhargala (interven¬tion for creating happiness) on the tenth house. If the planet in the ascendant is friendly to the planet in the tenth house, then the native has job satisfaction, and if inimical, there will be a lot of dissatisfaction. Thus the argala of the ascendant on the tenth house can promote or damage the prospects of the tenth house because of personal desires and whims. The eleventh house has dhanargala (wealth intervention) on the tenth house. Thus, incentives like bonus can make a dent on the performance. For example, if Rahu is in the eleventh house the results of one’s actions will come suddenly while Saturn will delay the fruits. Retro¬grade planets can even deny the fruits of the actions until they become direct in transit. The eighth house has labhargala on the tenth house. Thus, it determines the end of a work or career. The eleventh house from any bhava has the responsibility of finishing it. This has been aptly stated by Maharishi Jaimini in the stanza Tanou tana danda hara meaning the sixth is the house of punishment and the sixth from the sixth (11th house) is the destroyer (Hara). There are neither real enemies nor any real diseases in this illusionary world. These are only means for the Lord to punish us for our sins. People born on Shasta tithi (the sixth day of the waxing/waning) lunar cycle or during the period of planets in the sixth house from ascendant or the dasa sign, can suffer many problems due to enemies. Fasting on Shasta and worshipping Lord Shiva/Kartikeya is the best means to take the punish¬ment on oneself. This will end the enmity. Similarly, people born on ekadasi (11th day of lunar cycle) or during the period of planets in the eleventh house from ascendant or the planetary dasa sign, can suffer due to shadripu (six forms of weaknesses like non¬vegetarian food, alcohol, sex, etc). They should fast on ekadasi days and worship Sri Maha Vishnu to overcome these weaknesses.

4 The fourth point is to consider the placement of the planet from the vari¬ous houses. For example, Saturn in the tenth will be in the eighth from the third house and will give a long lived younger co-born. It will also aspect the seventh house to promise a long life to spouse. There is a saying Brahma (Saturn) gives life, Vishnu (Mer¬cury) gives wealth and all means of sustenance, and Shiva (Jupiter) gives marriage, children, Guru and all blessings. Thus, if Saturn aspects any house, it gives long life to that house but if it conjoins a house, its longevity is curtailed. Saturn conjoining the lords of the 1st, 10th & 8th houses can reduce longevity. The Sun or Jupiter in the tenth house will be in the eighth from the third and can destroy the dharma & fortune of the younger brother because they are very inimical to the sixth house from their placement (Sarvartha Chintamani). It was for this very reason that the horoscope of Srila Prabhupada had to be rectified. 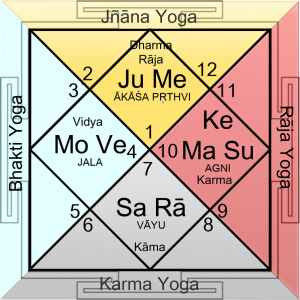 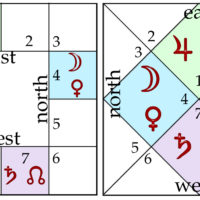 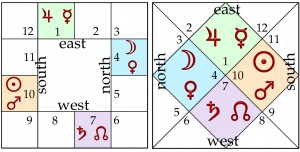 The deities of the Dasāṁśa are the ten digpāla including Brahma (vertical downwards) and Ananta (vertical upwards) reckoned directly in odd signs and in the reverse in even signs. 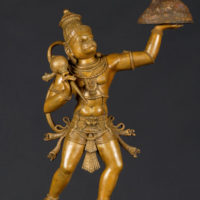 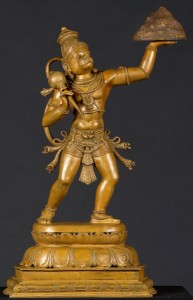 The Dasāṁśa is the one-tenth division of a sign covering 3° of arc. Dasāṁśa is reckoned from the sign itself for odd signs and from the 9th therefrom for even signs. This has the approval of Parāśara, Satyācārya, Sārāvalī etc.

2. Exalted and debilitated planets give excellent financial prospects. In own sign, the finances are good while in friendly signs, middling. In inimical signs the finances may be adversely affected with a mere trickle of funds inspite of tremendous effort.

Accordingly, for matters of money,

11. The Lagna or Chandra Lagna represents the ideals and belief and are the prime motivation in the Dasāṁśa for work. The exalted lagna lord (or exalted planets in lagna) indicates and idealistic person while a debilitated planet indicates otherwise. This is also modified b the nature of the planet, for even the lordship of the three worlds cannot satisfy an exalted Saturn.

12. Partnerships are examined from the 7th house in dasāṁśa.