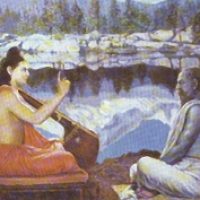 This is the chapter title. The word ‘atha’ is an auspicious and inceptive particle which has no English equivalent. It simply means ‘now’ as a reference to a sequence of teaching or time. It consists of two syllables
अ (a) which refers to Vasudeva [refer to creation concepts where we learn that the entire universe is an expansion of Vasudeva and a half of Vasudeva is perceptible universe while the other half is imperceptible. Thus, Vasudeva is called Jagannath, the lord of the universe.
थ (tha) means (1) a protector when there is a sign of danger (2) eating for the sake of preservation and (3) an auspicious prayer that removes every kind of fear

Thus, ‘atha’ refers to the action थ (tha) of अ (a) or Vasudeva protecting the teacher and the seeker of the knowledge. It reminds us to say the mantra ॐ नमो भगवते वासुदेवाय om namo bhagavate vāsudevāya which is the signature mantra of Veda Vyasa as taught in the puranas.

ṣoḍaśa means sixteen (16); varga means division or part (of life) and technically refers to the division of the Rashi; adhyāya means chapter

Maharṣi Parāśara advises us to study the sixteen divisions of the sign. Although there are many more divisions of the rāśi, what we are going to learn is the sixteen divisions only as they are the most important. This has a direct bearing on the sixteen kalā (rays of consciousness) of the mind. This fact or correlation between the ṣoḍaśa varga and the Chandra forms the basis for the Chandrakalā nāḍi (a nāḍi text of classical jyotiṣa). Only Śrī Kṛṣṇa was born with this complete strength of the mind which is why He is the Chandra avatāra of Viṣṇu in the incarnation.

So what then are really the ṣoḍaśa varga? They are the aspects of mental consciousness that work through five levels of consciousness.

The specific names used by Parāśara in describing the ṣoḍaśa varga are very important as they provide the clue to their study. There are other names for each of the varga which we will learn later.

Students are required to
(1) memorize these names [no marks] (2) determine the meaning of sixteen names used by Parāśara for the divisional charts in not more than 10 words each.