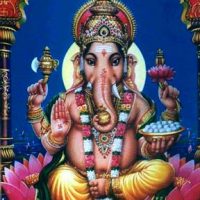 Caturvimśāṁśa, literally meaning ‘24’ is used loosely for both charts while siddhāṁśa has generally been used by all astrologers do refer to the apara-vidyā chart. On the other hand Parāśara uses the word वेदवाह्वंश (vedavāhvaṁśa) to introduce the D24-Chart. The name implies that it is the carrier of all knowledge as the number ‘24’ refers to the gāyatrī chandas associated with this divisional chart. Naturally then, these is para-vidyā also included in this and we refer to this as D-24P Chart or vedavāhvaṁśa.

Both charts are constructed using the following śloka:

The name siddhāṁśa is used for both caturvimśāṁśa of apara vidyā as well as vedavāhvaṁśa of para vidyā.

All signs have their reckoning originating from the sign owned by a luminary – Leo owned by Sun or Cancer owned by Moon. In spiritual world, this is the Śiva-Śaktī discourse where all knowledge is symbolised by light of the luminaries.

Apara Vidyā uses the Caturvimśāṁśa (D24 Chart) where the count is always direct based on the ‘Brahma – Creator Principle’ of Saturn where the signs have always got to be reckoned direct. The 24 divisions of Aries and all odd signs are counted from Leo in the direct order i.e. Leo-Virgo-Libra and so on. The 24 divisions of Taurus and all even signs are counted from Cancer, also in the direct order i.e. Cancer-Leo-Virgo and so on. This chart is used for studying formal or social education related to the mundane world. It includes schooling, graduate and post graduate studies including masters and doctorate education. Accordingly the table for caturvimśāṁśa is furnished below.

Para Vidyā uses the Vedavāhvaṁśa (D24P or D24V Chart) where the only exception is that for Taurus and all even signs, the divisions are reckoned in the reverse order i.e. Cancer-Gemini-Taurus and so on. This chart uses the principle called ‘anuloma-viloma’ where anuloma refers to that which follows the grain and the odd signs follow the Sun in the anuloma gati which is direct order; viloma also called pratiloma means going against the grain and the even signs follow the Moon in taking the viloma gati or the anti-zodiacal order. Accordingly the table for vedavāhvaṁśa is furnished below.